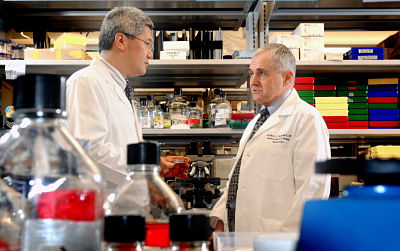 New research suggests that some milder forms of autism may be associated with a gene defect that hampers the body’s ability to make carnitine, a compound that helps convert fat into energy. The researchers caution, however, that this defect only affects a small subset of persons with autism and that more research is needed to determine whether this association is harmless or truly contributes to the development of autism.

The study, published online today in the Proceedings of the National Academy of Sciences, was supported in part by a grant from Autism Speaks and used anonymous biological information from Autism Speaks Autism Genetic Resource Exchange (AGRE).

“How [this gene defect] is associated with the causes of autism is as yet unclear,” says senior researcher Arthur Beaudet, M.D., chair of molecular and human genetics at Baylor College of Medicine. “However, it could point to a means of treatment or even prevention in some patients.”

Beaudet’s research team had previously identified a mutation in the gene for an enzyme (trimethyllysine dioxygenase) that the body needs to manufacture carnitine. In the new study, they compared the frequency of this mutation in nearly 3,000 boys with autism versus a control group of nearly 9,000 men not affected by the disorder.

The mutation was equally common in the control group and among boys with autism who were the only ones in their family affected by the disorder (around 1 in 323 to 366). However, the mutation was three times more common in a small subgroup of boys with autism from families who had one or more additional family member affected by the disorder. Six out of seven of the boys in this group had the deletion, suggesting that it may be inherited. None of these boys had a severe “syndrome” form of autism, such as fragile X or Rett’s syndrome.

Previously, a few small clinical trials suggested carnitine supplements can improve autism symptoms in some persons with autism. The hypothesis, or possible explanation, is that carnitine deficiency may worsen autism symptoms by hampering the production of energy in cells, including the brain’s neurons.

As a nutrient, carnitine is also available through diet – primarily meat. Carnitine deficiency can result from dietary insufficiency, hampered absorption and/or genetic defects affecting the body’s ability to make the nutrient.

The gene mutation that the researchers tracked occurs on the X chromosome. Since boys inherit only one X-chromosome (girls inherit two), they are more likely to suffer any effects associated with the gene defect.

According to the researchers’ calculations, the gene mutation they studied may occur in about one half of one percent of autism cases. In other words, if the mutation does cause or worsen autism symptoms, it likely does so in only a small and specialized subset of people.

“This intriguing report, if further replicated and explored, starts to connect the dots between genetic changes and clinical features that may speak to possible new diagnostics and interventions,” says Andy Shih, Ph.D., Autism Speaks vice president for scientific affairs.

Beaudet and his colleagues plan to pursue further research to clarify the possible link between carnitine deficiency and autism. They will attempt to replicate their findings with larger numbers of families with more than one child with autism. They also hope to measure carnitine levels in infants with autism and compare the results between those who have the mutation and others who do not. Finally, they are planning a clinical trial in which they will provide carnitine supplements to young boys with autism to determine whether or not the treatment improves symptoms and whether this improvement is greater with boys who have the genetic mutation that interferes with carnitine production.

For more information on carnitine, see this recent blog post by Autism Speaks Head of Medical Research Joseph Horrigan, M.D. Autism Speaks continues to fund a number ofstudies on the role that nutrition and diet play in autism and its associated symptoms. You can explore these and other supported studies using our Grant Search. Thanks to our donors, volunteers, families and other supporters for making this research possible.